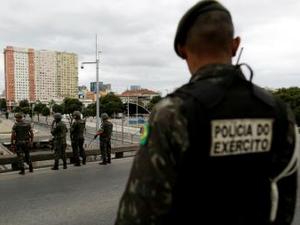 A gunman is holding as many as 16 bus passengers hostage in Rio de Janeiro on Tuesday, officials said.

At least six people have been freed from the vehicle that is stopped on a bridge connecting Rio with neighboring city Niteroi.

Heavily armed police have surrounded the bus as they negotiate with the gunman, who G1 news reported is armed with a gun and gasoline.

The gunman reportedly boarded the bus at 5:30 am (0830 GMT) and began threatening passengers.

Traffic on the Rio-Niteroi bridge spanning Guanabara Bay has been paralysed during the ongoing hostage situation.