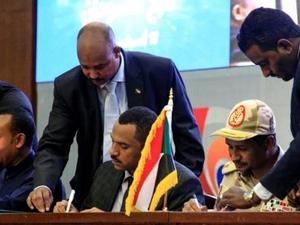 Sudan's transition towards civilian rule got off to a bumpy start as generals and protest leaders fell two days behind schedule Tuesday in unveiling a joint sovereign council.

The body will replace the transitional military council that took over from longtime ruler Omar al-Bashir when he was forced from power by relentless protests in April.

The Islamist general appeared in court sitting in a cage to face graft charges Monday, a sight that the two thirds of Sudan's 40 million inhabitants who were born under his rule could hardly have imagined.

The very first steps of the transition to civilian rule after 30 years of Bashir's regime were proving difficult however with disagreements within the protest camp holding up the formation of Sudan's new ruling body.

The line-up was due to have been announced on Sunday, in line with a deal reached between the Transitional Military Council and the Forces for Freedom and Change opposition coalition.

The TMC said on Monday however that the deadline had been pushed back 48 hours "at the request of the Forces for Freedom and Change" after they came back on some of the five names they initially put forward.

The ruling sovereign council will be composed of 11 members including six civilians and five from the military.

It will be headed by a general for the first 21 months and by a civilian for the remaining 18 months.

The roadmap drawn up by the generals and protest leaders in recent weeks set Tuesday as the date of the official appointment of a transitional prime minister.

Abdalla Hamdok, a former UN economist based in Addis Ababa, has accepted the protest camp's nomination but awaits the announcement of the sovereign council and has yet to arrive in the country.

The transition's key documents were signed on Saturday at a ceremony attended by a host of foreign dignitaries, signalling that Sudan could be on its way to shedding the pariah status the bloody war in Darfur had conferred on it in recent years.

Amidst the euphoria celebrating the promise of civilian rule, unease was palpable however within the protest camp that brought about one of the most crucial changes in Sudan's modern history.

One of its causes is the omnipresence in the transition of Mohamed Hamdan Daglo, a paramilitary commander and one of the signatories of the documents, whose forces are blamed for the deadly repression of the protests.

Sudanese women, who played a leading role in the protests, have also expressed their shock at female under-representation in the transition.

Every newspaper in Sudan made its headlines with Bashir's landmark court appearance Tuesday.

Some of them carried pictures of the ousted ruler in his courtroom cage, an image that instantly became another symbol of his Islamist military regime's downfall.

During the three-hour hearing, an investigator told the court Bashir had admitted to receiving $90 million from Saudi royals in recent years.

Large amounts of cash were found at his residence after he was toppled and police investigator Ahmed Ali said the case brought before the court concerned some of that money.

"The accused told us that the money was part of a sum of $25 million sent to him by Prince Mohammed bin Salman to be used outside of the state budget," he said.

"This money was not part of the state budget and I was the one who authorised its spending," the investigator quoted Bashir as saying.

The next hearing was scheduled for August 24.