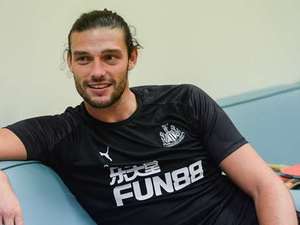 Andy Carroll has admitted his football IQ was so low he had to use Google to find out who Luis Suarez was when he joined Liverpool in 2011.

Carroll moved to Merseyside for a record fee for a British player of £35 million ($42 million) and teamed up with the Uruguyan superstar in attack.

The 30-year-old former England international striker excused his ignorance by saying he meant no disrespect to Liverpool or Suarez.

He said he was just much more interested in going out with his friends than following football off the pitch when he was making his name at his first club Newcastle.

Carroll, who has returned to Newcastle on a one year deal after being released by West Ham over the summer, had to Google Suarez while he was flying by helicopter to Liverpool to complete the transfer on the final day of the January 2011 transfer window.

Suarez had signed just days before from Ajax for just over £22 million but Carroll told the Newcastle United team website he had no idea who his future team-mate was.

"When I was here (at Newcastle), I'd go home, mess about with my mates, play football, go out, whatever, but I'd never watch football. I never knew any players," said Carroll, who earned his record move to Liverpool after scoring 31 goals in 80 appearances for the Magpies.

"I'd come in on the Friday or wake up on the Saturday morning saying,'Who are we playing?'

"I was completely oblivious to all the football that was going on.

"When I was in the helicopter to Liverpool, I was like, 'I know Stevie G (Gerrard), I know (Jamie) Carragher. Who else?'

"My agent at the time had to tell me and I would get it on Google and find out the team.

"It's bad because it's Liverpool players, but it's not disrespectful —- I just literally didn't watch football."

Carroll whose career has been wrecked by injuries -- even his Liverpool debut was delayed due to an injury he had suffered at Newcastle -- also assured the Newcastle faithful that he is no longer the wild man he was in his first spell at the club.

"I was daft when I was here before and no doubt I was daft for a couple of years after as well," said Carroll.

"But I met my missus (Billi Mucklow) and we've got four kids at home now. There's no more behavior like before.

"I was stupid, I was young, and I was carried away with the lifestyle.

"Now it's completely different. I'm a dad, I've grown up and got responsibilities.