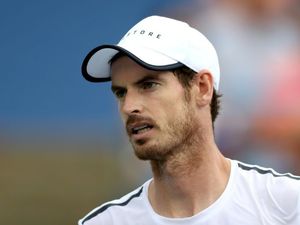 Andy Murray on Monday fell in the first round of the ATP Winston-Salem Open, where the three-time Grand Slam champion was giving his surgically repaired hip just its second test in singles.

Britain's Murray, who feared in January that his hip trouble would end his career, accepted a wild card into this week's tournament in North Carolina after falling in his singles comeback in Cincinnati last week.

He again showed glimpses of his once-dominant self, but was inconsistent in a 7-6 (10-8), 7-5 loss to 73rd-ranked American Tennys Sandgren in a match lasting 2 hours and 10 minutes.

"Some things were a bit better today I think," Murray said. "I was hitting the ball a bit cleaner than I did maybe in Cincinnati... I feel like I moved fairly well to some drop shots, which maybe last week I wasn't running to.

"So there's some good things in there but also some stuff I would like to do better."

Murray did not even reach the court until after 10 pm, thanks to a lengthy rain delay that pushed back his start time by more than three hours.

Sandgren gutted out a tough service hold in an opening game that went to deuce nine times, saving one break point as they went to the first-set decider without a break of serve.

The American needed four set points -- and saved one -- in taking the tiebreaker.

A deflated Murray was quickly down 3-0 with two breaks of serve in the second.

He clawed one back, and broke again when Sandgren coughed up two double faults while serving for the match at 5-4.

But Sandgren broke Murray again in the next game and then took full advantage of his second chance, capping the match with a forehand winner on his first match point.

Having said in Cincinnati he would discontinue doubles to focus on returning to peak singles form, Murray said he might consider playing an ATP Challenger Tour event before heading to Asia, where he is entered in September's Zhuhai Championships and the China Open.

"Maybe I need to play a level down to get some matches and build my game up a little bit before I start playing on the tour again," he said.

In other action on a day when rain wreaked havoc on the schedule, South Korean Lee Duck-hee became the first deaf player to win an ATP Tour match, beating Switzerland's Henri Laaksonen 7-6 (7/4), 6-1.

"My message for people who are hearing impaired is to not be discouraged. If you try hard, you can do anything," said Lee, who will next face third-seeded Hubert Hurkacz of Poland.

Lee was two points from victory when thunderstorms swept through.

When he and Laaksonen returned some five hours later, Lee quickly polished off a win he admitted he hadn't been expecting.

"I thought that I was just going to do my best and try to stay focused," Lee said. "But I came out a winner."