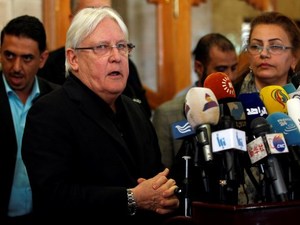 The U.N.'s special envoy to Yemen warned Tuesday that the war-ravaged country faced the prospect of breaking apart unless an agreement ending the decades-long conflict is found urgently.

Martin Griffiths told the U.N. Security Council that there is "no time to lose" in brokering a peace deal to bring the fighting to a close.

"The fragmentation of Yemen is becoming a stronger and more pressing threat," the British diplomat said via videolink from Jordan.

"The stakes are becoming too high for the future of Yemen, the Yemeni people and the wider region. Yemen cannot wait," he added.

Griffiths comments came as Yemeni separatists drove government troops out of two military camps in deadly clashes in Abyan province Tuesday, reinforcing their presence in the south after they seized the de facto capital Aden.

Griffiths condemned the recent takeover of Aden by the Southern Transitional Council (STC) in clashes that reflected the independence ambitions of southern Yemen and left around 40 people dead.

"We certainly cannot underestimate the risks that these events pose for the future of the country," Griffiths told delegates.

"No country can tolerate the stresses of internal conflict indefinitely," he added saying the war must be brought to an end "swiftly and peacefully."

The separatist Southern Transitional Council (STC) and government forces have been fighting the Iran-aligned Huthi rebels in a years-long war that has pushed the country to the brink of famine.

A spike in tensions between the two has constrained their cooperation in the fight against the Huthis, however.

The conflict has claimed the lives of tens of thousands of people and displaced around 3.3 million since 2015.

Two-thirds of the population -- about 20 million people -- require humanitarian support, according to the United Nations.

South Yemen was a separate state until it merged with the north in 1990.

A Saudi-led military coalition, which has backed pro-government forces against the Huthi rebels since 2015, sent a delegation to Aden last week to discuss the new front in the crisis.

In his address Tuesday, Griffiths welcomed efforts by Saudi Arabia to convene a dialogue in Jeddah to discuss the current situation and resolve its difficulties.