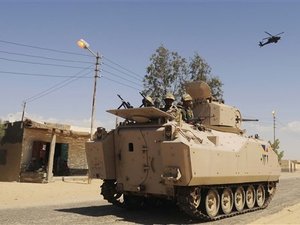 Egyptian security forces killed 11 militants in the restive North Sinai region, the interior ministry said Tuesday, 18 months into an operation against an Islamic State group affiliate based there.

The "terrorist elements", armed with weapons and explosives, were killed in a shootout during a raid on their hideout near a police station in the provincial capital El-Arish, the ministry said in a statement.

According to intelligence from the national security department, the militants used the hideout as "a base to launch their hostile operations," it added.

Egypt has for years been fighting an insurgency in North Sinai, which escalated following the military's 2013 ouster of Islamist president Mohamed Morsi following mass protests.

Since then, hundreds of police officers and soldiers have been killed in jihadist attacks.

In February 2018, the army launched a nationwide operation against the militants, focusing mainly on North Sinai.

Some 650 militants and around 45 soldiers have been killed since, according to a tally based on statements by the armed forces.

No independently verified death toll is available and the region is largely cut off to journalists.

However the Egyptian government has recently begun organizing occasional media visits, closely supervised by the military.