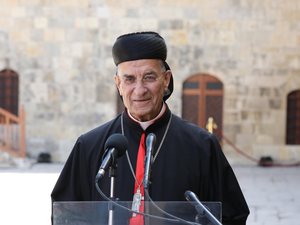 “The visit was to congratulate President Aoun on moving (to Beiteddine), which has created a nice atmosphere after the tensions that Lebanon witnessed,” al-Rahi said after the meeting, adding that his visit to Beiteddine is aimed at “consolidating the historic reconciliation” between Druze and Christians in Mount Lebanon.

He added: “We discussed the economic issue, whose repercussions affect all people, and the government will tackle this file tomorrow.”

“We discussed with President Aoun the interpretation of Article 95” of the Constitution, al-Rahi said, emphasizing that “the Constitution should be implemented as a whole and not selectively.”

“Article 95 does not scare but rather gives a guarantee to all people,” he added.

Aoun has asked Parliament to hold a session to interpret Article 95 of the Constitution after a sectarian row erupted over employment in state administrations.

Article 95 stipulates that “the Chamber of Deputies that is elected on the basis of equality between Muslims and Christians shall take the appropriate measures to bring about the abolition of political confessionalism according to a transitional plan.”

The Article adds that “the principle of confessional representation in public service jobs, in the judiciary, in the military and security institutions, and in public and mixed agencies shall be canceled in accordance with the requirements of national reconciliation; they shall be replaced by the principle of expertise and competence.”

Separately, al-Rahi said that a national defense strategy is “essential” for the country.

“It should be devised, because it is a vital necessity for Lebanon,” the patriarch added, amid renewed controversy over the topic.

Never has Lebanon known or seen an FPM appointed Patriarch who knows about the constitution and defense strategy as much as this one, ever!