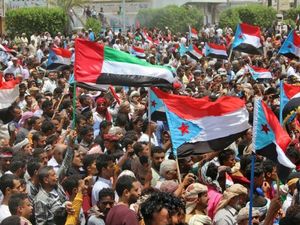 The United Arab Emirates on Wednesday rejected accusations it supported Yemeni separatists in their seizure of the government's de facto capital Aden.

"We regret hearing today allegations directed against the UAE regarding developments in Aden, which we categorically reject," the UAE's deputy permanent representative to the United Nations, Saud Al-Shamsi, wrote on Twitter.

As a key partner in the Saudi-led military coalition backing the government against northern-based Huthi rebels, "the UAE is exerting all efforts to de-escalate the situation in Yemen", he added.

The clashes in the capital of formerly independent South Yemen left around 40 people dead.

Shortly after, separatist forces withdrew from key positions under pressure from Saudi Arabia and the UAE, which were pushing for talks.

But on Tuesday, separatist fighters from the Southern Transitional Council (STC), who dominate the Security Belt Forces, drove government troops out of two military camps along the coast from Aden.

South Yemen was an independent state from 1967 until it merged with the north in 1990.

The spike in tensions between separatists and pro-government forces constrains their cooperation against a common foe -- the Iran-aligned Huthis -- in a war that has pushed the country to the brink of famine.

The Yemeni government, which has denounced an Emirati-backed "coup", said Tuesday the UAE was "fully responsible for the armed rebellion" and urged it to stop backing "this militia".

Yemen's UN permanent representative, Abdullah al-Saadi, said "the armed rebellion (in Aden)... is supported financially, logistically and with the knowledge of the UAE", according to Yemeni state media.

"If it were not for the full support of the UAE, this rebellion would not have taken place," he told the UN Security Council.

The U.N.'s Yemen envoy Martin Griffiths warned Tuesday that the war-torn country faced the prospect of breaking apart unless an agreement ending the decades-long conflict is found urgently.

Griffiths headed to the Yemeni capital Sanaa on Wednesday to meet with Huthi rebel officials, according to a U.N. source.

The Saudi-led coalition -- of which the UAE is a key members -- intervened in the Yemen war in 2015 after the rebels ousted the government and took over Sanaa.

Since then, the fighting has killed tens of thousands of people and sparked what the U.N. labels the world's worst humanitarian crisis.