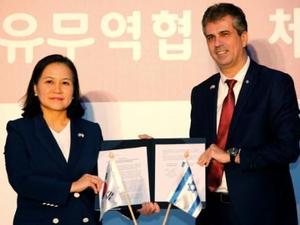 Israel and South Korea announced Wednesday they have concluded a free-trade agreement to eliminate tariffs on goods ranging from cars and medical equipment to lipstick and video games.

It was not clear when the agreement could enter into force.

"The advantage of this agreement will go beyond our economic ties," Cohen said at a ceremony to announce the deal.

"I'm confident that this will also mark the start of a new era and an even closer friendship between Israel and Korea."

South Korean Trade Minister Yoo Myung-hee said at the ceremony that "I hope that Israeli companies will take full advantage of Korea as a stepping stone into the vast Asian market."

Before Wednesday's ceremony, the pending agreement had been the subject of political controversy in Israel over claims it would not apply to goods from Israeli settlements.

Cohen denied that was the case and said if businesses in settlements were in any way disadvantaged they would be compensated by the government, as is the case with other trade deals.

The issue is a sensitive one in Israel, particularly ahead of September 17 elections. Israeli settlements are viewed as illegal under international law.

According to Israel's economy ministry, trade between the two countries reached $2.5 billion last year, an increase of nearly 15 percent over 2017.

South Korea is home to companies including Samsung, the world's biggest smartphone and memory chip maker, and carmaker Hyundai.

The deal foresees tariffs removed on Israeli imports of goods including vehicles, industrial machinery and video game consoles, according to Israel's economy ministry.

Israel is a major exporter of arms and defense equipment, but there was no mention of those being included in the deal.