'Digital Lebanon Conference' to be Held on September 13 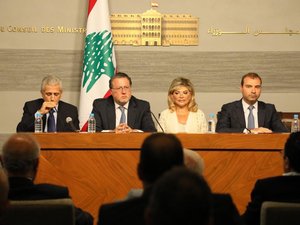 Beirut’s Grand Serail has hosted a press conference announcing Digital Lebanon Conference, which will be held under the patronage of Prime Minister Saad Hariri on September 13, 2019, in Beirut.

The Prime Minister's Advisor, Nadim Munla, attended along with directors and representatives of local and foreign telecommunications and information technology companies.

In his speech, Minister Choucair stressed on the importance of holding Digital Lebanon Conference under the patronage of PM Hariri. He added that it will contribute to the achievement of modernization in our economy and in our daily transactions; especially with the efforts exerted by the government to achieve digital transformation, and following the Arab Economic Summit held earlier in Beirut, which launched an initiative to establish a fund worth 200 million dollars to invest in the technology and digital economy fields.

Choucair announced that the Ministry of Telecommunications continues to extend the fiber optics network, which will be completed in two years and is also spreading the 4G service to LTE services, in addition to studying the launch of the fifth generation of mobile networks (5G).

On the other hand, Minister Chidiac expected to have the national digital transformation strategy and action plan ready by October 2019, noting that enabling work and investment in the fields of technology and digital transformation requires cooperation and coordination between the public and private sectors.

She hoped that the government will take the necessary measures to launch the digital transformation program, pointing to the readiness of the private sector to support any governmental actions; especially with the leading role that Lebanese companies are playing in software and information technology around the world.

From his side, Minister Afiouni stressed the importance of organizing Digital Lebanon conference within an economic and development framework and in light of the economic vision adopted by the Lebanese government. He elaborated that building a digital economy is one of the key elements comprising the government’s vision, as it contributes to promoting economic growth, creating jobs and attracting investments.

He pointed out that his ministry is working with other concerned ministries to create the environment needed to achieve the national digital transformation through a set of policies and incentives, in addition to accelerating digital transformation in the public and private sectors, stimulating investments in the digital sector, and supporting entrepreneurs. Minister Afiouni stressed the need to cooperate with the private sector and with local and international companies, as well as benefit from the capabilities of Lebanese talents in Lebanon and abroad.

In his speech, Mr. Abou Zaki stated that the conference aims to present Lebanon's attractiveness as an investment destination in digital economy, and encourage companies to perceive Lebanon as a hub for developing applications and platforms and providing digital services on the regional and international levels.

He said that the conference will discuss attracting private investments to all sectors related to digital economy in Lebanon, and developing the environment conducive to the growth of this sector, as well as giving digital transformation in the public sector a new impetus, and supporting emerging entrepreneurs.

Commenting on the announcement, Sharif El-Badawi, Managing Partner at 500 Startups and Chairman of TechWadi said: "Fostering and invigorating a robust entrepreneurial ecosystem is key for economic growth. At 500 Startups, our mission is to discover and back the world’s most talented entrepreneurs, help them create successful companies at scale and build thriving global ecosystems. Participating in events such as this, facilitate an excellent platform for us to work closely with the government and the private sector to bridge the technology and knowledge gaps in a world driven by new technologies that are radically creating new approaches and revolutionize the way in which nations, societies, and businesses engage and collaborate.”

The conference convenes following McKinsey’s study and its focus on the importance of developing the information and telecommunications sector and digital transformation, and as the government embarks on adopting and implementing a new plan to develop the digital economy by attracting new investments to new infrastructure, networks, applications and projects, as well as creating the needed environment, to position Lebanon on the global digital economy map.

The conference also addresses enhancing the role of start-ups and providing the key elements necessary for their success and sustainability. It highlights the use of the fifth generation of mobile networks, Blockchain technology, artificial intelligence, data centers and other technologies that are at the core of the digital transformation process.

The conference is expected to be attended by ministers, government officials and senior executives representing technology companies from various sectors in Lebanon and other countries, as well as Lebanese and international figures in the field of information and communications, experts, consulting companies and representatives from international organizations.