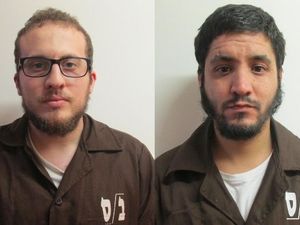 The two men from Tamra, a town in northern Israel, are accused of being "active in advancing... the ideology of the Islamic State" group.

"The suspects downloaded to their computers data and information that had Islamic State material, materials showing ways of preparing weapons and devices to be used in terror attacks.

"This was done to prepare for terror attacks," Shin Bet said.

Yasin and Armush appeared in court Thursday in the coastal city of Haifa, where they were charged over their alleged involvement with IS.

Shin Bet did not detail the charges or say when the suspects' trial would begin.

Around a dozen Israeli Arabs are fighting for IS in Syria and Iraq, the security service told AFP.

Israeli Arabs are the descendants of Palestinians who remained on their land after the 1948 creation of Israel.

They make up around 17.5 percent of Israel's population of nine million.