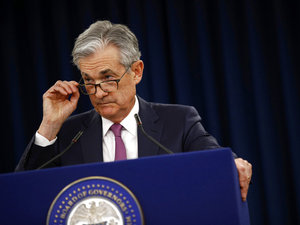 European and Asian  stock markets faltered Thursday on the eve of a speech from  Federal Reserve head Jerome Powell for clues on the outlook for U.S. interest rates.

"Caution is the word of the day... ahead of the key speech by the Fed chairman Jerome Powell," said analyst Naeem Aslam at trading firm ThinkMarkets.

Minutes published Wednesday from the Fed's July meeting -- when it cut rates for the first time since the financial crisis -- said policymakers were flexible and borrowing costs were not on a "preset course" despite trade uncertainty and weak global growth.

While the global economy stutters and the China-U.S. trade row rumbles along, markets have found solace in expectations the Fed will continue to lower rates.

The minutes meanwhile made no mention of Trump's constant attacks on Powell's stewardship of the US central bank.

"Markets remain in wait-and-see mode on Thursday, after the Fed minutes told us nothing we didn't already know," said analyst Craig Erlam at Oanda.

"The minutes on Wednesday highlighted just how difficult the current situation is, with the central bank deeply divided on the correct course of action, although there was a broad agreement that the July rate cut was a 'mid-cycle adjustment' rather than the start of an easing cycle."

However, Erlam sounded a cautious note.

"Oil looks in limbo at the moment. It's been steadily rising over the last couple of weeks but not in any convincing way, which suggests traders are waiting around for the next sell-off," he said.