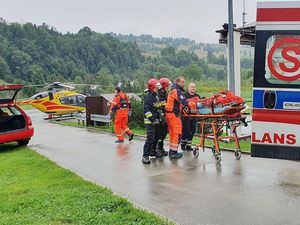 "A few" people died and 12 were injured Thursday during a sudden thunderstorm that saw lightning strike a metal cross in the Tatra mountains in southern Poland, rescuers said.

"There were a few deaths in different parts of the Tatra mountains" he said, without giving an exact toll.

Poland's TVN24 commercial news channel reported that lightning struck the large cross on the Giewont summit near the mountain resort town of Zakopane at a time when many hikers were present.

They had set out to climb Poland's highest mountains when the skies were clear earlier in the day. Despite the poor weather conditions, rescuers have set out by helicopter to look for the victims.