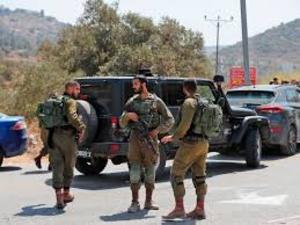 A rare homemade bomb attack in the occupied West Bank killed one Israeli on Friday while seriously wounding her father and brother as they visited a spring near a Jewish settlement, officials said.

Israeli security forces deployed throughout the area of the attack near the settlement of Dolev, northwest of Ramallah, in a search for suspects.

Israeli medics had earlier reported that a 17-year-old had been critically wounded in the attack and officials later announced her death, naming her as Rina Shnerb from the central Israeli city of Lod.

Medics from the Magen David Adom rescue service gave the ages of the two other casualties as 46 and 20. The army said the victims were a father and his two children.

The two wounded were taken by helicopter to hospital, the army said.

"Three civilians who were in a nearby spring were injured in an IED (improvised explosive device) blast," the army said in a statement.

Further details were not yet available on the incident.

Israeli Prime Minister Benjamin Netanyahu called it a "harsh terrorist attack" and sent condolences to the family, while pledging to continue settlement building.

"The security arms are in pursuit after the abhorrent terrorists," he said in a statement.

"We will apprehend them. The long arm of Israel reaches all those who seek our lives and will settle accounts with them."

In a speech on Friday, Ismail Haniya, the leader of the Islamist Hamas movement which rules Gaza, praised the attack but did not claim responsibility for it.

He referred to a recent clash between Israeli police and Palestinian worshipers at the highly sensitive al-Aqsa mosque compound in Israeli-annexed east Jerusalem and sought to draw a link between the two incidents.

Palestinian attacks on Israeli settlers and security forces occur sporadically in the West Bank, occupied by Israel since the Six-Day War of 1967, but bomb blasts have been rare in recent years.

The attacks have mostly involved guns, knives and car-rammings.

There have been concerns of a possible increase in violence in the run up to Israel's September 17 general election.

A week ago, a Palestinian car-ramming attack in the West Bank wounded two Israelis, while the assailant was shot dead.

There have also been tensions along the border with the blockaded Gaza Strip.

Late Thursday, a Palestinian threw grenades at Israeli soldiers while attempting to cross the Gaza border and was shot by Israeli forces, leaving him wounded, the army and the Gaza health ministry said.

Gaza militants have also launched six missiles at Israel in the past week.

The most recent were on Wednesday and in retaliation the army said it struck "a number of military targets in a Hamas naval facility in the northern Gaza Strip."