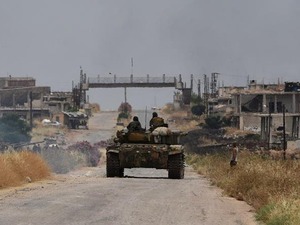 Syrian government forces surrounded a Turkish military observation post on Friday after overrunning nearby villages following their capture of a key northwestern town from jihadists, a war monitor said.

The town of Morek, where the Turkish troops have been cut off, lies in the north of Hama province, part of a jihadist-ruled region centered on neighboring Idlib province that has been under government assault since late April.

"Regime forces have surrounded the Turkish observation post in Morek after capturing other towns and villages in this pocket," the Syrian Observatory for Human Rights said.

The rebels had withdrawn from the area ahead of the army's entry into the strategic Idlib province town of Khan Sheikhun on Wednesday.

Government forces overran the rest of the pocket, including the town of Kafr Zita without resistance.

The observation post in Morek is one of 12 the Turkish army set up along the front line between government forces and the jihadists and their rebel allies last year.

Ankara vowed on Tuesday that it would not abandon any of the posts and warned Damascus "not to play with fire".

"We will do whatever is necessary to ensure the security of our soldiers and observation posts," Foreign Minister Mevlut Cavusoglu told reporters in Ankara.

The troops' mission was to oversee the establishment of a buffer zone agreed by Ankara and Moscow in September.

But the jihadists failed to pull back from the zone as agreed and in April, government and Russian forces resumed intense bombardment of the region.

Nearly 900 civilians have been killed, according to the Observatory.

More than 400,000 have fled their homes, the United Nations says.

The Idlib region, which sits on the Turkish border, is now the last major stronghold of opposition to the Russia-backed government of President Bashar al-Assad.

Since January, it has been ruled by the Hayat Tahrir al-Sham alliance, which is led by jihadists from Syria's former al-Qaida affiliate.

Other rebel groups allied with Turkey were forced to cede overall control.

On August 8, Syrian government forces launched a ground offensive with Russian support against the southern part of the rebel-held region, eyeing control of the main highway from Damascus through Idlib province to second city Aleppo.

Khan Sheikhun is one of the key towns along the highway.