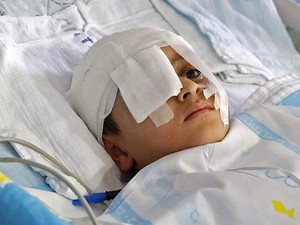 The nine-year-old Palestinian boy lies in a hospital bed without speaking, his wounded head wrapped in bandages, and his father says he wants answers from Israel over how it happened.

"He wasn't in protests or anything. What was his fault? What is this young child's guilt?" Yassir Shtewi told AFP at the Israeli hospital where his son Abdelrahman is being treated.

It has been more than a month since the family and Palestinian officials say the boy was shot in the head by Israeli forces during clashes in his home village of Kufr Qaddum in the northern West Bank.

His doctors say he hasn't spoken since.

The U.N. envoy for the Israeli-Palestinian conflict has joined the family's call for a thorough investigation, while two people who said they witnessed it say he was not near the clashes when hit on July 12.

An Israeli military official who agreed to speak about the incident on condition of anonymity said the army was investigating, but insisted no live fire was used that day and the boy was not targeted.

He suggested he may have been hit by a stray rubber bullet, which Israeli soldiers fire regularly during clashes with Palestinians.

"At no stage did any soldier aim at that specific boy and we understand that he appears to have been wounded by a rubber bullet," the official said.

Palestinian officials allege he was hit by live fire.

His family fears he could suffer permanent brain damage and his father keeps watch over him next to his hospital bed.

He says his son wakes up briefly to open his eyes before falling back asleep.

"Standing at the door of a house and you shoot him?" his father said.

Kufr Qaddum, where most of the 4,000 residents are from the extended Shtewi family, is only a few hundred metres from the nearest Israeli settlement.

Its main road to the nearby city of Nablus was closed by Israel during the bloody second Palestinian intifada, or uprising, in the early 2000s.

Israel says it was closed to prevent attacks. For several years, residents have demonstrated every Friday for it to be reopened.

Demonstrators typically burn tires and throw stones at soldiers, who use tear gas and often rubber bullets to break them up.

On July 12, clashes east of the village were unusually fierce, according to the army and witnesses.

The Israeli official described an "elevated level of violence from the Palestinian rioters," saying there were more rocks thrown and masked demonstrators than usual.

He estimated around 60 Palestinians were involved in "riots," which the army said also included tires being burnt.

Around 300 meters from the main confrontations, a few Palestinians were throwing stones towards four soldiers on a hilltop, two people who said they witnessed it said.

Abdelrahman Shtewi was watching from below, standing by a gate leading to a relative's house, they said.

Riyadh Shtewi said he was watching on a street with his two young sons 150 metres away from the youths and noticed Abdelrahman near him.

Another witness, also called Abdel Rahman Shtewi, said the boy was eating grapes he had picked.

He was wearing a black shirt and flip flops, CCTV footage said to have been taken shortly beforehand in the village's main shop shows.

The owner said he had bought a one shekel ($0.30) orange and pineapple ice cream.

A little after 2 pm, Riyadh Shtewi said he noticed one soldier with a rifle turn towards him, so he ran with his children.

"We were going down the hill and then I saw Abdelrahman was hit," he told AFP at the site of the incident. "There was blood like a waterfall."

Video seen by AFP shows what witnesses say was Riyadh Shtewi cradling the child's limp body and bringing him to a nearby ambulance. The area where he was standing was drenched in blood.

The Israeli official declined to comment on how close the boy was to the clashes, citing the ongoing investigation.

"We are not claiming that the boy participated in a riot," he said.

Abdelrahman, now being treated at Sheba Medical Center near Tel Aviv, can squeeze the doctor's finger but has yet to speak, his doctor said.

The family believes that to be the case, though says doctors have not said definitively.

A Palestinian doctor who first operated on the boy, before his transfer to Sheba, told AFP his finding was that a bullet entered the top of his forehead and fractured into dozens of pieces inside his head.

The doctor, Othman Mohammed Othman, called the injury unique in his 17 years of work, but declined to speculate on the bullet type.

The Israeli official said that "conclusively no live fire was used that day."

In a statement to AFP, United Nations envoy Nickolay Mladenov said he was "alarmed by the shooting of nine-year old Abdelrahman" and demanded a "thorough investigation".

As he sleeps each night by his son's bed, Yassir Shtewi waits for any improvement.

"I asked the doctor 'will he need a month, two months or a year?'" he said.