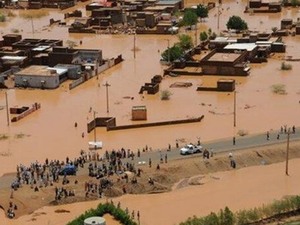 Rain and flash floods have killed 54 people in Sudan since the start of July and affected nearly 200,000, the United Nations said Friday.

The worst affected area is While Nile state in the south but Khartoum and other regions have also been affected.

"More than 37,000 homes have been destroyed or damaged," the U.N. said, quoting figures from the government body it partners with in the crisis response.

"Humanitarians are concerned by the high likelihood of more flash floods," it said, adding that most of the 54 recorded deaths were due to collapsed roofs and electrocution.

The floods are having a lasting humanitarian impact on communities, with cut roads, damaged water points, lost livestock and the spread of water-borne diseases by insects.

The U.N. Office for the Coordination of Humanitarian Affairs said an extra $150 million were needed from donors to respond to the floods, in addition to the $1.1 billion required for the overall humanitarian situation in Sudan.