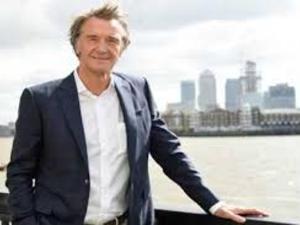 The long mooted takeover of Nice by English petrochemical billionaire Jim Ratcliffe is all but complete, and the question now is whether he can turn the club into regular challengers in Ligue 1.

The 66-year-old Ratcliffe, chairman of Ineos, bought the Sky cycling team earlier this year before rebranding it as Team Ineos. He also owns Swiss club Lausanne-Sport.

The French Competition Authority this week cleared the path for Ratcliffe -- a Brexit backer based in Monaco --  to complete the takeover of Nice from their Sino-American owners.

Beyond Ratcliffe's own motivations, there is no doubt Nice are a club with great potential, based on the sun-soaked Cote d'Azur and with a modern 36,000-seat stadium. On-field performances have already improved in recent years, peaking with a third-place finish in 2017.

Under former France star Patrick Vieira, a young side have started this season with two wins from two before hosting Marseille next Wednesday in a fixture that is one of three moved -- bizarrely -- to avoid a clash with the G7 summit in Biarritz.

That flying start has been achieved despite Nice not bringing in any senior signings, but all that is set to change with Ineos now arriving.

"The takeover has maybe taken longer than expected. It has been difficult to make signings," complained Vieira recently.

One new face set to join is Kasper Dolberg, with reports in France stating the young Denmark forward is on the brink of signing from Ajax.

The hope is he will provide the goals Nice so desperately lacked last season, but it is likely to take some time before Vieira's team are competing for Champions League qualification.

Nevertheless, Nice supporters will hope Ratcliffe's money can help them compete for success over the long term in a French football landscape dominated by the likes of Qatar-owned Paris Saint-Germain and Russian-owned Monaco.

Player to watch: Wissam Ben YedderCapped four times by France, forward Ben Yedder has returned to Ligue 1 with Monaco after being among the top scorers in Spain last season with Sevilla.

The 2017 champions signed Ben Yedder in a deal worth a reported 40 million euros ($44.7 million) but his career with the principality club started badly, as Monaco lost 3-0 at Metz last week on the back of a 3-0 defeat against Lyon in their first outing.

They host Nimes on Sunday and need Ben Yedder to make his mark quickly, along with fellow new attacking recruits Henry Onyekuru and Islam Slimani.

"It was hard to leave Seville," said the 29-year-old. "Monaco want to compete at the top of the table. Lots of clubs were interested in me but I chose Monaco and I am satisfied."

His arrival comes with Radamel Falcao's future at the club uncertain. The Colombian is believed to want to join Galatasaray, making Ben Yedder's presence all the more important.