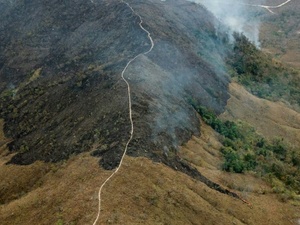 G7 leaders gathering in France this weekend plan to hammer out "concrete measures" in response to the wildfires raging in the Amazon rainforest, putting them on a collision course with Brazil's rightwing leader.

French President Emmanuel Macron, who is hosting the G7 summit in the resort town of Biarritz, went so far on Friday as to accuse his Brazilian counterpart of lying on pledges in June to help fight global warming June.

"Given the attitude of Brazil over the last weeks, the president can only conclude that President Bolsonaro lied to him at the Osaka (G20) summit," a French presidential official said.

France said it will oppose an ambitious trade deal between the EU and South America's Mercosur nations, which would effectively kill any chance of ratification.

Macron had already drawn Bolsonaro's ire by saying the Amazon fires would be a priority on the G7 agenda, a stance that was backed Friday by German Chancellor Angela Merkel.

Britain's new Prime Minister Boris Johnson is also "extremely concerned by the fires," a  spokeswoman said, as demonstrations were held across Europe calling for Brazil to step up actions to quench the blazes.

Bolsonaro blasted the move to make the fires as topic for G7 leaders without any participation by Brazil, saying it reflected a "colonialist mentality."

The latest official figures show 76,720 forest fires were recorded in Brazil so far this year -- the highest number for any year since 2013. More than half are in the Amazon.

The leaders of France, the US, Canada, Britain, Germany, Italy and Japan already face a litany of thorny issues at their meeting in the post Atlantic beach town of Biarritz, which is on a security lockdown for the weekend meeting.

"We're at a critical moment," Macron had warned on Wednesday, acknowledging that Iran is "laying out a strategy for exiting the JCPOA," the name of the 2015 accord reining in the country's nuclear ambitions.

The nuclear deal has all but collapsed after US President Donald Trump pulled the US out unilaterally in May 2018 and reimposed sanctions that have wreaked havoc on the Iranian economy.

But Macron had pledged to "try to propose things" in Friday's talks with Foreign Minister Mohammad Javad Zarif.

"President Macron made some suggestions last week to President (Hassan) Rouhani and we believe they are moving in the right direction, although we are not definitely there yet," Zarif told AFP in an interview after the talks.

Macron's diplomacy is a delicate task, with France seeking a rollback on some of the U.S. measures imposed on Iran as part of Trump's "maximum pressure" policy towards the Islamic republic, which says its nuclear program is peaceful.

French diplomats have raised the idea of US waivers on sanctions affecting Iranian oil exports to India and China, or a new credit line for Tehran that could help the struggling economy.

That prompted Trump to accuse Macron of sending Tehran "mixed signals" in his attempt to broker fresh talks between the longtime adversaries.

But Trump appears to be the outlier among America's G7 partners on Iran, despite speculation that Johnson, who claims a close personal rapport with the US leader, might be more amenable to endorsing his stance.

On Friday, a British diplomatic source said the UK would continue to back the 2015 nuclear deal, which it helped broker, as the "best way" of preventing Iran from obtaining a nuclear weapon.

Iran is just one of a host of issues where G7 members France, the United States, Canada, Britain, Germany, Italy and Japan find themselves at loggerheads, upending what used to be a cosy club of rich nations.

Trump is set to arrive in the glitzy beachside resort of Biarritz on Saturday already riled by a new French law that will increase taxes on U.S. internet giants such as Google and Facebook.

He is also threatening tariffs on the European automobile sector, while the climate change skeptic is not expected to contribute to Macron's official agenda of fighting global warming.

And just before the summit, China fired the latest salvo in its trade war the US, announcing new tariffs on $75 billion of American imports.

But in a sign of the summit's lowered ambitions, French officials have already scrapped any joint declaration at the end of the summit, breaking a longstanding G7 tradition.