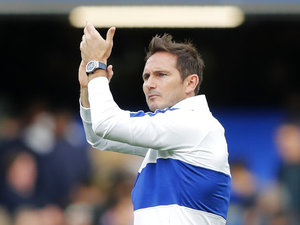 Neither Tammy Abraham or Olivier Giroud scored in the opening defeat at Manchester United, while Michy Batshuayi has yet to feature.

Lampard has no options to change his forward line with Chelsea serving a transfer ban.

France veteran Giroud did score in Chelsea's European Super Cup loss to Liverpool in Istanbul and Lampard is confident his forwards will come good, starting at Norwich on Saturday.

"As I said before, if we'd have been more clinical in front of goal we possibly could have had three wins," Lampard told reporters on Friday.

"The competition is there and that's the challenge for the strikers.

"I've got no problems with their attitude and training. We work hard on the training ground as a team to create and also to finish. I used to love practicing my finishing in training.

"What I have got is great attitude in the three strikers. But others in the squad also always want to stay out, want to work harder.

"We've got some great attacking players here and it will come."

Lampard praised the 25-year-old's showing in the reserves, insisting Chelsea need him to contribute at first team level this season.

"I thought it was a good performance and he got the fitness work he needed out of the game," said Lampard.

"It was two good goals; two very good finishes. He worked hard and that's exactly what the game was for.

"We need Michy, we need the competition up front. I thought the team performance was really good."

Antonio Rudiger is not ready to feature this weekend as he closes in on a return after long-term knee trouble.

Pedro missed training earlier in the week but was rested after a hectic fixture schedule and is expected to be fit to take on the Canaries.

"Kante has got an injury he has carried all week, so we'll assess that over the next 24 hours," Lampard said.

"Rudiger's not fit yet, hopefully for next week. That's the only changes from where we were last week."