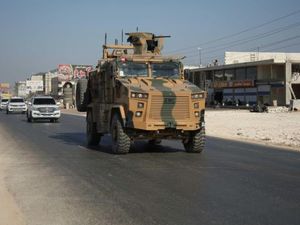 Regime forces massed Saturday in northwest Syria in a bid to push further north after overrunning a key town and surrounding a Turkish army outpost, a monitor said.

Backed by Russia, Syrian President Bashar al-Assad's forces have chipped away at the south of the jihadist-run bastion of Idlib in past weeks after months of deadly bombardment.

On Wednesday, they seized the key town of Khan Sheikhun from jihadists and allied rebels, and on Friday overran the countryside to the south of the town, encircling a Turkish observation post there.

"The day after they controlled the area south of Khan Sheikhun, regime forces are massing in the area north of it," Rami Abdel Rahman, the head of the Britain-based monitoring group, told AFP.

They are "preparing to continue their advance towards the area of Maaret al-Numan", a town some 25 kilometres (15 miles) to the north, he said.

That area has come under intense Russian and regime aerial bombardment and been depleted of almost all of its residents in the past two weeks, the Observatory says.

After Khan Sheikhun, Maaret al-Noman is the next town on a key highway running across the Idlib province that analysts say is coveted by the regime.

Any full government control of that road would allow it to connect the capital Damascus with second city Aleppo, retaken from opposition fighters in late 2016.

The Idlib region of some three million people lies on the border with Turkey, and Turkish troops have been deployed at a dozen points around it in an attempt to set up a buffer zone to protect it.

A deal between Russia and rebel backer Turkey signed in September last year sought to set up the demilitarised area to avert a full-out regime assault, but jihadists refused to withdraw.

Assad advisor Buthaina Shaaban on Friday accused Turkey of "turning the observation points into spots for transporting weapons and occupying a part of our land".

Earlier Turkey's Foreign Minister Mevlut Cavusoglu denied the observation post in Morek had been surrounded and vowed that his country's troops would not withdraw from there.

Turkey's President Recep Tayyip Erdogan is to visit Moscow on Tuesday for talks with his Russian counterpart Vladimir Putin.