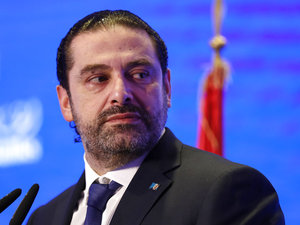 "This new aggression... forms a threat to regional stability and an attempt to push the situation towards more tension," he said in a statement.

Hariri also charged that it was in violation of U.N. Security Council Resolution 1701 that ended a 2006 war between Israel and Lebanon's Hizbullah.

The premier added that he will remain in contact with President Michel Aoun and Speaker Nabih Berri agree on the "next steps."

Hariri also urged the international community and "Lebanon's friends in the world" to shoulder "the responsibility of protecting Resolution 1701 from the threats and repercussions of the Israeli violations," noting that the Lebanese government will "fully shoulder its responsibilities in this regard."

and how does this incompetent spineless prime minister view hezbollah's aggression in Syria, Iraq, and Yemen?