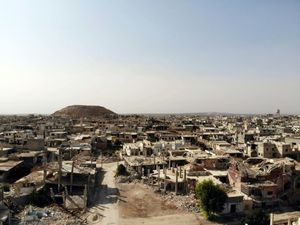 Syrian soldier Ahmad Amuri rolls up on a motorbike to hand water bottles to comrades standing guard under pistachio trees, just a few dozen metres from a Turkish observation point in northwest Syria.

President Bashar al-Assad's troops seized the town of Morek from jihadists and allied rebels on Friday, encircling the Turkish outpost.

"Calm has returned to Morek," Amuri told AFP on Saturday, with water bottles in a black plastic bag, a cap on his head and his uniform covered in dust.

A Turkish flag flaps over the post nearby, which is fortified by a tall cement wall and barbed wire, but AFP could not see any Turkish soldiers.

"Today is a day of rest," the soldier in his twenties told AFP during a guided government tour for journalists.

"We're not at all worried by the presence of a Turkish observation post."

Syria's conflict has spiralled into a complex war involving world powers since its beginnings in 2011 with the repression of anti-Assad protests.

In northwest Syria, regime forces have in recent days chipped away at the jihadist-dominated region of Idlib on the Turkish border after months of deadly bombardment.

That is despite a deal reached between rebel backer Turkey and regime ally Russia last year to set up a buffer zone around the region to protect its some three million inhabitants.

In Morek, Syrian soldiers gather around an officer preparing to deploy across the municipality.

He opens up a map, pointing to the location of the Turkish outpost and planned Syrian army positions.

The Syrian officer told AFP that the Turkish outpost was an "international matter".

"We pass by the Turkish position at Morek, the Turkish soldiers haven't turned on us, nor us on them. We see them clearly and they see us too," he said.

"We're waiting for orders to know the next stage," he added.

"We will work to bring back civilians as soon as possible."

The Turkish-Russian deal in September last year was supposed to avert any full-blown offensive on Idlib, but it was never fully implemented.

In January, Hayat Tahrir al-Sham -- an alliance led by Syria's former Al-Qaeda affiliate -- extended its influence across Idlib and nearby parts of other provinces.

Increased bombardment by the Syrian military and its Russian ally since late April has killed more than 900 civilians in Idlib.

In the same period, the violence has displaced more than 400,000 people including many already displaced from other areas, the United Nations says.

To the north of Morek, regime forces also retook the key town of Khan Sheikhun on Wednesday.

Inside Khan Sheikhun, 27-year-old Mohamed al-Awaj said he was happy to return home after fleeing in 2012.

"The town has changed so much," he said.

Around him, Khan Sheikhun was nearly empty, its buildings damaged or completely ruined. The tracks of armoured vehicles were visible by the side of one road.

"I found my home burnt and neighbourhood destroyed," he said.

"I haven't seen any of my neighbours except for Umm Baheera," a 70-year-old woman he said was the only person who stayed behind.

A team of AFP correspondents only saw two civilian families.

Gun on his shoulder, Hussein Hassan said he had helped his battalion navigate the streets of Khan Sheikhun, where he grew up.

"I spent my childhood playing in these roads. I know them by heart," said the 28-year-old who left his home town several years ago.

"It used to be so beautiful," he said.

"But I didn't recognise the town for all the destruction."

If one bullet is fired on the Turks....Allah yistor. The Turks would end the regime in 5 minutes.