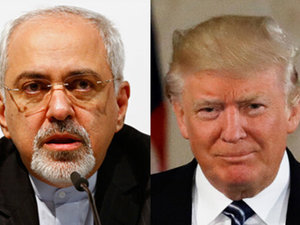 U.S. President Donald Trump said he gave his approval to the unannounced invitation of Iran's top diplomat on the margins of the G-7 summit, denying Monday that he was surprised or angered.

French President Emmanuel Macron's invitation was a bold gamble that he could secure a breakthrough in global tensions over Iran's nuclear program following Trump's decision to pull the United States out of the 2015 nuclear deal and impose new sanctions.

Trump would not say if any Americans met with Zarif during his brief time in Biarritz.

Tensions over Iran, Russia, the U.S. trade war with China and the faltering global economy have dominated the three-day summit, which Trump and Macron will finish with a joint news conference Monday.

The other leaders of the G-7 countries, which include Germany, Britain, Canada, Italy and Japan, have downplayed their differences with Trump, known for his short fuse and skepticism of international cooperation. It was not clear when precisely Macron extended the invitation to Zarif or when he informed the others that the Iranian was on his way. Trump said he and Macron spoke directly.

The French president's office said everything came together in a matter of hours.

"I said if you want to do that, that's OK. I don't consider that disrespectful at all. Especially when he asked me for approval," Trump said.

In a televised speech, Iranian President Rouhani also appeared on the defensive, shielding his foreign minister against criticism from hard-liners who have rejected negotiations until sanctions are lifted. Iran's economy has nosedived since the U.S. imposed new sanctions.

"If I knew that going to a meeting and visiting a person would help my country's development and resolve the problems of the people, I would not miss it," Rouhani said. "Even if the odds of success are not 90% but are 20 or 10%, we must move ahead with it. We should not miss opportunities."

Macron has said the summit will end without a final joint statement, hoping to avoid last year's disastrous summit in Canada when Trump repudiated his signature shortly after leaving and tweeted criticism of the host, Canadian Prime Minister Justin Trudeau.

But officials were expecting more limited agreements on issues such as coordinating taxes on the digital business of tech giants.

The Trump administration had earlier this year responded with threats of retaliatory tariffs on French wine.

Asked about the wine tariffs on Monday, Trump said "it depends on the deal we work out on the digital tax," which "We're negotiating right now."

The French official, who spoke only on condition of anonymity to discuss the private talks, said France will scrap the tax if an international digital tax deal can be reached.