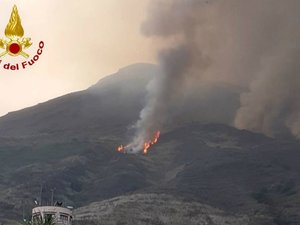 Italy's Stromboli volcano off the coast of Sicily erupted Wednesday, according to fire fighters who rushed to put out wildfires sparked by lava flows.

Emergency services scrambled to launch motorboats and helicopters after the "strong explosion" in the south-central slope of the crater shook the island, but no-one was hurt, the fire service said on Twitter.

Falling ash from a vast mushrooming cloud covered the rooves of houses in the tiny windswept town of Stromboli, the Repubblica newspaper said, adding that the explosion had been felt on the nearby island of Salina.

The volcano, which is part of the Aeolian Islands archipelago in southern Italy, had been off limits to walkers following a deadly eruption in June which killed a hiker and sent tourists fleeing.

Stromboli, just 12 square kilometers (4.6 square miles) in area and 924 meters (3,000 feet) high, is just the top of a volcano that is largely underwater.

It is one of few in the world with almost continuous activity, according to the National Institute of Geophysics and Volcanology.