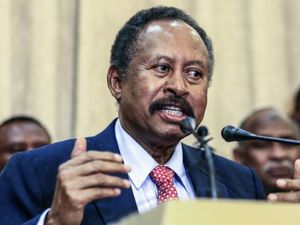 Sudan's new prime minister was Thursday locked in talks to form the first cabinet since the ouster of veteran leader Omar al-Bashir, in another step in its transition from decades of autocratic rule.

Prime Minister Abdalla Hamdok had been due to name his key picks on Wednesday, following last week's swearing in of a joint civilian-military sovereign council.

The council is due to steer the country through a three-year transition to civilian rule.

On Thursday a source close to Hamdok said the prime minister was still considering nominees for the cabinet.

"Deliberations are still underway and it is not clear when they will end," the source told AFP.

Hamdok, who took the oath last week, was set to make his selection from a field put forward by the Forces for Freedom Change -- an umbrella group that led months-long protests against Bashir and then pushed the generals who deposed him in April to share power.

On Tuesday, Hamdok confirmed that he had received the FFC's list of candidates including 49 nominees for 14 ministries.

The FFC and the generals signed a power-sharing deal earlier in August outlining Sudan's transitional structures.

Under the deal, the cabinet should be largely selected by the premier.

Only the interior and defence ministers will be chosen by the military members of Sudan's ruling body.

On Saturday, Hamdok told a local television channel that he would select technocrats based on their "competence".

The delay however raised concerns among some in Sudan.

"It is not good... the country has been without a government for almost five months now," said 48-year-old Hassan Abdelmeguid, who is a government employee.

"Sudan is facing a great deal of challenges and require quick formation of a government," he added.

Sudan's economy was dealt devastating blows by two decades of US sanctions, which were only lifted in 2017, and the 2011 secession of the oil-rich south.

Spiralling inflation and acute hardship were the main triggers for the anti-Bashir protests that erupted in December.

Much-needed foreign investment remains hampered by Sudan's designation by the United States as a state sponsor of terrorism.

Hamdok said he is holding talks with US officials to remove Sudan from Washington's blacklist.

Another challenge is forging peace with rebel groups in the country's far-flung regions within six months.

The three conflicts have left hundreds of thousands of people killed and millions displaced.

And though the conflict in Darfur which erupted in 2003 has subsided over the years, rebels in other areas remain active.

Wednesday's delay was not the first challenge facing the country's transition to civilian rule.

The line-up of Sudan's 11-member sovereign council was held up for two days over differences within the opposition camp before it was finally announced on August 21.

According to the roadmap toward transition, the new government and the sovereign council are expected to meet for the first time on September 1 but it is now unclear if that date will be kept.

Government employee Sanya Mohamed said the delays may be for good reasons.

"If they serve the purpose of bringing in competent people, then it is alright," the 33-year-old said.

"But if it was due to disagreements over the candidates then the delay would be worrying. The country can not take it."