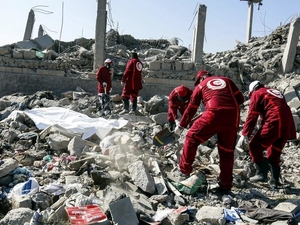 Yemen was reeling Monday from the deadliest attack so far this year after multiple airstrikes by the Saudi-led coalition hit a detention center run by the country's rebels the previous day, killing over 100 people and wounding dozens.

By midday, rescue and search teams retrieved 86 bodies but continued to search for more in the rubble of a building complex in southwestern Dhamar province that the Iran-backed rebel Houthis were using as a detention center, Yemen's Red Crescent said.

There were around 170 detainees at the facility when the airstrikes hit on Sunday. The International Committee for the Red Cross said 40 wounded were being treated for injuries while the rest were presumed dead.

Franz Rauchenstein, the head of the ICRC delegation in Yemen, visited the site of Sunday's attack, suggesting the final death toll would be higher and saying relatively few detainees survived. The ICRC said it would likely take several days to locate all the bodies and pull them out.

The Saudi-led coalition, which has waged war on the Iran-backed Houthis since 2015, has faced international criticism for airstrikes that have hit schools, hospitals and wedding parties, killing thousands of civilians in Yemen's civil war.

Bashir al-Dawrani, a spokesman for Yemen's Red Crescent in Dhamar, said the wounded were taken to various hospitals in Dhamar and the capital, Sanaa. Dhamar is located around 100 kilometers (62 miles) south of Sanaa.

"We are still working to pull out bodies from the rubbles," he said.

The Yemen U.N. Office of the High Commissioner for Human Rights confirmed that 52 detainees are among the dead.

The Saudi-led coalition denied striking a rebel-run detention center, saying instead that it destroyed a Houthi facility used as storage for drones and missiles in Dhamar, "in accordance with international humanitarian law."

However, the Houthis said the detainees were captured forces loyal to Yemen's internationally recognized government and that the International Red Cross and the coalition knew about it.

Local residents said the center also held their imprisoned family members, arrested for being critical of the Houthis.

Also, the Abductees' Mothers Union, an association of female relatives of detainees jailed by the Houthis, said "dozens of abductees and people who were disappeared by force" elsewhere in Yemen had been brought to the center from other areas under rebel control.

The mothers' group said some detainees had died from torture in the center and called for an international investigation into Sunday's airstrikes and abuses against the detainees.

Yemen's civil war has claimed tens of thousands of lives, thrust millions to the brink of famine and spawned the world's worst humanitarian crisis.