Egypt VP Says Protests Must End for Talks to Start 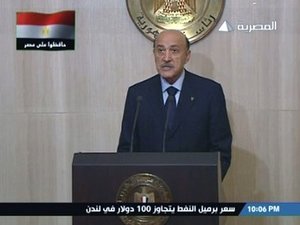 Anti-government protests that have shaken Egypt must end before talks with the opposition can start, Vice President Omar Suleiman said Wednesday, calling on protesters to respect a curfew and go home.

Suleiman, the veteran intelligence chief appointed to the office of vice president last week, urged demonstrators to respect an earlier call from the Egyptian army and return to their homes, state media said.

"Dialogue with the political (opposition) forces ... requires that the demonstrations end and the Egyptian street return to normal," he said.

His comments came after U.S. President Barack Obama led world leaders in calling for the transition from Mubarak's rule to begin immediately but the Egyptian foreign ministry rejected such calls charging that they "sought to inflame the internal situation in Egypt".

Suleiman, who was named by Mubarak on Saturday as his first vice president in 30 years in power, has offered to open dialogue with anti-government protesters.

But opposition leaders have insisted there can be no negotiated transition until the veteran head of state steps down.

On Wednesday evening, Suleiman called on "all citizens to respond to our armed forces' call to return to your homes and respect the curfew, to support the state's efforts to restore calm and stability.

"Those taking part in these protests have delivered their message," he said.