Hit by US Sanctions JTB Says Deposits are Insured 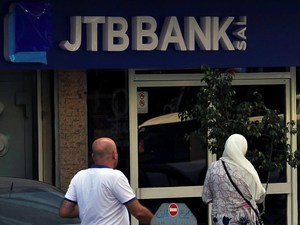 A Lebanese bank targeted by the U.S. Department of the Treasury for "knowingly facilitating banking activities" for Hizbullah says it will remain open and guarantees all deposits are insured at the time they are due.

The bank's statement on Tuesday also confirms its commitment to abiding strictly by the rules and regulations of the Central Bank of Lebanon and denies all allegations against it.

The bank says it's continuously coordinating with Lebanon's central bank "to overcome the current crisis and will do everything possible to clear its good name."

The U.S. has been imposing sanctions on officials from Hizbullah, which Washington considers a terrorist organization.

Insured by?? This is a lie.