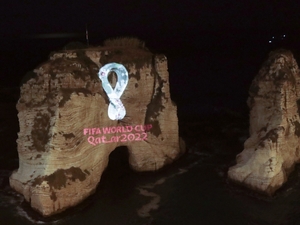 Flashed on big screens and projected onto landmarks worldwide, the 2022 Qatar World Cup logo was revealed Tuesday with a design that reflects both the tournament's compact infrastructure and winter schedule.

Using the colors of the Qatari flag, the white emblem is set against a maroon background and it finally provides an image for soccer's most controversial tournament beyond construction sites.

It was inspired by the contours of the World Cup trophy with the unbroken loop depicting a figure of eight — the number of stadiums built for the Middle East's first World Cup in the tiny Persian Gulf nation.

FIFA said the design also draws "inspiration from a traditional woolen shawl," a winter garment reflecting the World Cup being played in November and December 2022 to avoid the fierce summer heat in June and July when the tournament is usually played.

The reveal came at 2022 local time (8:22 p.m.) in Doha and the image was projected onto buildings in the Qatari capital, including the Al Zubarah Fort, and appeared at sites in Kuwait, Lebanon, Jordan and Iraq.

Some other countries in the region played no role in the launch due to the ongoing political tensions.

The United Arab Emirates, Saudi Arabia and Egypt have been boycotting Qatar economically and diplomatically since 2017, and its severing of travel links could prove problematic for fan travel in 2022.

Among the international sites where the logo was displayed on Tuesday were the Arch of Peace in Milan, trains stations in Paris and Rio de Janeiro and Times Square in New York.

Ten sites were used in Turkey, reflecting Qatar's deepening alliance with a regional ally that has helped it circumvent the Gulf boycott impact on food and construction supplies.

Qatar won a FIFA vote in 2010 that has been dogged by controversy. A FIFA investigation found that some of Qatar's conduct "may not have met the standards" required while concluding there was no "evidence of any improper activity by the bid team."

Working conditions and rights for migrant laborers building the stadiums in Qatar were also criticized, forcing standards to be raised.