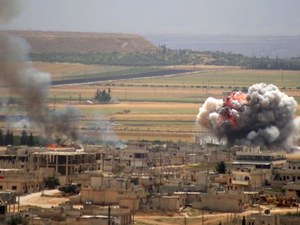 Syrian regime defences Tuesday confronted drones headed towards a key airbase of government ally Russia in northwest Syria, state media said, on the fourth day of a ceasefire in the region.

"The sounds that were heard over the city of Latakia are the result of territorial defences confronting drones dispatched by the terrorists in the de-escalation area towards the Hmeimim base," state news agency SANA said, using its blanket term for rebels and jihadists.

A fragile ceasefire has held in northwest Syria since early Saturday after months of deadly bombardment by the regime and Russia on the jihadist-run region of Idlib.

The regime-held coastal city of Latakia and Russia's Hmeimim airbase lie to its west.

The Syrian Observatory for Human Rights, a Britain-based monitor, said there was no immediate report of casualties.

Regime and Russian bombardment have killed more than 960 civilians in Idlib since the end of April, according to the Observatory, which relies on sources inside Syria for its information.

The United Nations says more than 400,000 people have fled their homes in that region in that same period.

The truce is the latest Russian-led effort to avert what the United Nations has described as one of the worst humanitarian "nightmares" in Syria's eight-year conflict.

It is the second such agreement between Assad's regime and jihadists since August 1.

But on Saturday, an advisor to President Bashar al-Assad said that the ceasefire was "temporary."

Buthaina Shaaban said it "serves the grand strategy of liberating every inch of Syrian territory".

Since January, the whole of the Idlib region has been administered by Hayat Tahrir al-Sham, an alliance led by Syria's former Al-Qaeda affiliate.

The war has killed more than 370,000 people and driven millions from their homes since it started with the repression of anti-government protests in 2011.