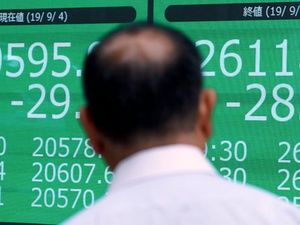 Asian stock markets rose Wednesday following surprise weakness in U.S. manufacturing and wrangling in Britain over the country's departure from the European Union.

The Institute for Supply Management, an association of purchasing managers, said its manufacturing index slid to a 3½-year low of 49.1 last month from July's 51.2.

Softer global demand, aggravated by the U.S.-Chinese tariff war, appears to be hurting American manufacturers. Public comments from companies surveyed by ISM pointed to economic uncertainty as a drag on their businesses.

"This is perhaps one of the stronger signs that the U.S. is likewise feeling the weight from the on-going uncertainties alongside the world," said Jingyi Pan of IG in a report.

In London, Prime Minister Boris Johnson suffered a setback when Parliament agreed to allow his opponents to introduce legislation that would block Britain from leaving the EU without an agreement on terms of their future trade and other relations. Britain is due to withdraw Oct. 31, a deadline the trade bloc's other members would have to agree to postpone.

Johnson's plan to call a new election to reinforce his position "could again induce more volatility," said Mizuho Bank in a report.

On Tuesday, technology companies drove a slide in U.S. stocks as markets reopened following a holiday weekend and the latest round of tariff hikes by Beijing and Washington on each other's imports.

AUSTRALIAN ECONOMY: Australia's economic growth fell to a decade low, but the government tried to reassure the public the country wasn't headed for its first recession in 29 years. Data released Wednesday showed economy expanded by 1.4% in the year that ended in June and 0.5% in the latest quarter. Treasurer Josh Frydenberg told reporters economic fundamentals still are strong and the latest data fail to reflect the impact of cuts in taxes and interest rates.