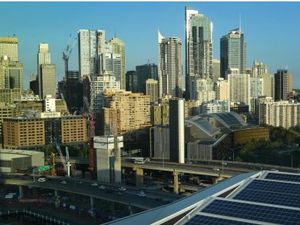 The Australian economy has recorded its weakest annual growth in a decade, official data released Wednesday showed, expanding just 1.4 percent in the year to June.

The Australian Bureau of Statistics reported the economy grew 0.5 percent between April and June compared with the previous quarter, a small increase driven by mining exports and government spending.

Australia has avoided recession for almost 28 years but Wednesday's figures will fuel concerns about the economic outlook with growth falling to its lowest levels since the global financial crisis in 2009.

No other OECD nation has enjoyed such a prolonged uninterrupted period of economic growth, in part thanks to a mining boom in the 2000s on the back of strong demand for resources from China.

Shane Oliver, chief economist at AMP Capital, said the current risk of a recession "cannot be ignored", with conditions in some pockets of the economy already feeling "recession-like".

The central bank kept the main interest rate at a record low of 1.00 percent on Tuesday owing to subdued consumer spending and a slump in the housing market. Analysts believe the bank could further cut rates in the coming months to help boost the economy.

"It is reasonable to expect that an extended period of low interest rates will be required," Reserve Bank of Australia chief Philip Lowe said.

But Prime Minister Scott Morrison was upbeat about the weak data, telling local radio on Wednesday he was confident recent tax cuts would stimulate the economy in the current quarter.

"That happened in the September quarter and the figures we're talking about today were for last year," he said. "So you can't govern by rear-vision mirror. You have to look forward."

Treasurer Josh Frydenberg also downplayed the numbers, saying the economy had shown "remarkable resilience" amid global economic headwinds brought on by trade tensions between the United States and China.

"Despite the challenges that the Australian economy is encountering -- very significant challenges, both domestically and internationally, the trade tensions (along) with flood, with drought -- we have still performed relatively well," he told reporters in Canberra.

"I want to emphasise that Germany, the United Kingdom, Sweden, Singapore and others experienced negative growth in the June quarter, whereas the Australian economy continues to grow."

He also pointed to the fact that Australia's current account balance this week returned to surplus for the first time since 1975, posting a Aus$5.9 billion (US$4 billion) surplus on the back of a spike in iron ore prices.