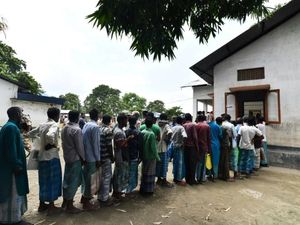 After living in India all his life, father-of-two Gokul Chandra Saha woke up last weekend to learn he was among almost two million people in the religiously diverse state of Assam that the government had suddenly deemed to be foreigners.

Saha, 68, a Hindu, insists he has the documents to prove his Indian credentials and is hoping to appeal against the decision, one case among many in what has proved to be a highly controversial and confusing effort to roll out of a "National Register of Citizens" in Assam.

The register, initially feared to be a stalking horse for the ruling Hindu-nationalist Bharatiya Janata Party (BJP) to expel Muslims, has in fact ensnared many people from both religions.

Whether it be from the Muslim or Hindu perspective, there is much anger, confusion and despair with many people insisting they have been unfairly made stateless.

"There is a complete mess somewhere," Saha told AFP, adding that his two daughters, who used the same property document to prove their Assam connections for the list, had been deemed citizens.

"It's harassment, I have not able to sleep for the past two nights."

Bengali speakers make up around 30 percent of Assam's 33 million population.

About two-thirds of the Bengalis are Muslim, the rest Hindu. Assamese speakers, the largest community, are mostly Hindu.

Tensions in the ethnic and religious melting pot have at times boiled over into violence with 2,000 Bengali Muslims butchered in one day in 1983.

These tensions have increased pressure for a lasting political solution, which local Hindu politicians said would come in the form of the citizens' register.

The register is intended to omit everyone unable to prove they were in the state before 1971, when millions fled into India during Bangladesh's war of independence.

Those born in Assam after 1971 have to prove that their parents or grandparents entered India before that.

With the BJP vowing to pursue its pro-Hindu agenda on many fronts, Muslims -- which make up 13 percent of India's 1.3 billion population -- feared they would be the main targets for exclusion on the register.

But when the list of citizens was finally published on Saturday, many Bengali-speaking Hindus such as Saha found they had been excluded.

Other families told AFP of how some of them were not included in the register, while relatives had made the cut, even though they supplied the same documents.

While there are no clear answers as to how or why individuals have been included or excluded, bureaucratic bungling amid the mountains of paperwork appears to be one factor.

From Modi downwards, senior figures in Delhi are keeping quiet. One senior official, without wanting to be named, told reporters claims that the list was biased against a particular religion "has absolutely no basis", adding that equal numbers of Hindus and Muslims were excluded.

However there appears to be some hope for the Hindus left off the list, as they have the support of powerful politicians.

Bengali-speaking Hindus rallied behind the BJP, helping it to come to power in state elections in 2016.

Local BJP leaders are now pressuring the national government to pass a quick legislative fix to protect their voting base.

Meanwhile, powerful politicians have made no such calls to protect Muslims such as Syed Burhan Ahmed, who say they have been left off the list unfairly.

"My son and my daughter used my legacy (documents) but they have not included my name in the NRC. How is it possible?," the 85-year-old retired Assam government employee told AFP.

Those left off the register have 120 days to appeal at so-called Foreigners Tribunals, and if they fail, they can appeal against that decision through the courts.

The government has stressed that those omitted will not become stateless, and that any decisions taken would be consistent with India's "democratic traditions".

But there are fears the appeal process could become as chaotic as the registration system, with critics saying tribunal staff are unqualified.

"Muslims like me have been living in Assam for generations. Our forefathers came to this land centuries back. We have valid documents to prove our Indian citizenship and yet there are doubts," Ahmed said.