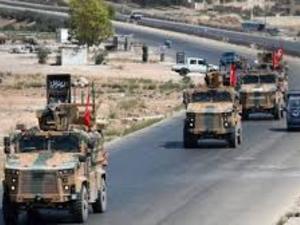 The NATO allies last month agreed to set up a buffer zone between the Turkish border and Syrian areas controlled by the U.S.-backed Kurdish People's Protection Units (YPG).

Turkish President Recep Tayyip Erdogan has said Ankara will not allow Washington to delay the plan -- which Turkish authorities have long been pressing for.

Presidential spokesman Ibrahim Kalin told Bolton in a telephone call that "the Turkish side has completed preparations for the implementation of the Turkish-U.S. joint operation plan without delay," Anadolu reported.

The two also discussed a possible meeting between Erdogan and U.S. President Donald Trump on the margins of the annual U.N. General Assembly meetings in New York later this month.

Turkey has repeatedly threatened to launch a new military offensive against YPG forces in northern Syria, where the Kurdish group controls a large swathe of land.

The YPG -- a key partner to Washington in the fight against the Islamic State group in Syria -- has said they would help implement the buffer zone in their areas along the Turkish border.

Ankara says the YPG is a "terrorist" offshoot of the outlawed Kurdistan Workers' Party (PKK), which has been waging an insurgency inside Turkey since 1984.

The PKK is blacklisted as a terror group by Ankara, the US and the European Union.