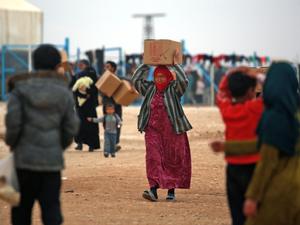 Strong rains and reduced violence in many Syrian regions have led to much improved harvests in 2019 but high prices remain a threat to food security, the U.N. said Thursday.

It remains far from the 4.1 million tonne averaged in years prior to the war which erupted in 2011 with the repression of anti-government protests.

Since then, more than 370,000 people have been killed, half of the population was displaced and millions remain in need of humanitarian assistance.

The U.N. report said barley yields shot up to even surpass pre-war levels but it warned that bigger harvests did not automatically translate into increased food security.

"Despite the good rains, farmers in rural areas are still facing many challenges," the Food and Agriculture Organisation's Syria representative, Mike Robson, said.

He cited the lack of access to seeds and fertilizers, high transport costs, insufficient marketing opportunities and unexploded ordnance.

Robson warned that reliance on food assistance would remain if no support to agricultural livelihoods was offered.

"Food prices have been gradually increasing over the past 12 to 14 months," said Herve Verhoosel, spokesman for the World Food Program.

He said the main reasons were "increased domestic fuel prices and a continuous depreciation of the Syrian pound on the informal exchange market."

The currency hit a record low of 650 against the dollar this week, a 7 to 1 depreciation from the pre-war rate.

AFP did not know that the launch of the insurgency was done by its government working with France's partners and torture specialists. It knew but it was not supposed to know, so, in legal terms, it did not know, and cannot be held responsible for not doing anything about this. It is considering its legal options against those who make it feel bad for just doing what comes naturally to a true Frenchman, whatever his race, creed, or gender.