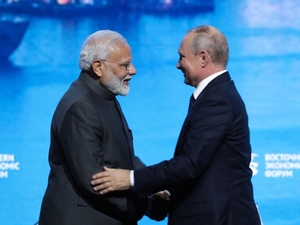 President Vladimir Putin sought to lure Asian investment to Russia's Far East on Thursday as the launch was announced of a huge Arctic gas project aimed at Asian markets.

The region is full of "hardworking, energetic people", "industries of the future" and "the richest reserves of natural resources", Putin said.

"Take advantage of these opportunities," he told a plenary session of the Eastern Economic Forum.

Moscow has hosted the forum every year since 2015 as it looks to bolster ties with Asia amid tensions with the West.

Russian gas firm Novatek announced at the forum the launch of a major liquefied natural gas project in the Arctic with Chinese, French and Japanese partners.

Novatek said a final decision had been made on financing the $21 billion Arctic LNG 2 project with partners including France's Total, CNPC and CNOOC of China, and a Japanese consortium of Mitsui & Co and JOGMEC.

The project will see the development of a gas field and the building of a liquefaction plant on the Gydan Peninsula in Russia's Arctic, with exports starting in 2023.

It is the second launch of a major project for Novatek in the Arctic in the last three years as Russia -- already the world's biggest gas exporter -- looks to develop LNG shipments to energy-hungry Asian markets.

Russian petrochemicals firm Sibur also announced a deal Thursday for gas giant Gazprom to supply it with liquefied petroleum gas for a new plant on the border with China that will produce polymers for Chinese plastic production.

In his speech at the plenary, Abe hailed Japan's growing business ties with Russia and Moscow's development of the Arctic through new technology and ice-breaking ships.

The Arctic LNG 2 project, he said, would be the realization of a "grand connection" between the Pacific and Arctic oceans.

"For the first time in human history these two oceans will become one, and a magnificent physical distribution highway will come into being," he said.

Abe urged Putin to finally sign a peace treaty with Japan, overcoming the two countries' differences over a chain of Far Eastern islands.

Putin said however that there were still "many questions" that needed to be resolved before the signing of a treaty.

Putin and Abe have met 27 times in bids to resolve the dispute, which centers on islands -- known in Russia as the Kurils and the Northern Territories in Japan -- seized by Soviet troops in the dying days of World War II.

Modi told the forum that India was looking to "walk hand-in-hand with Russia on this visionary journey" to develop Far Eastern economic ties.

He said India would provide a $1 billion line of credit to promote investment in Russia's Far East.

Modi and Putin spent much of their time together on the forum's opening day on Wednesday, touring a naval shipyard and calling each other "close" and "great" friends.

No major new deals were announced in their talks, but a joint statement called for further cooperation including creating joint ventures in India to develop and manufacture civilian aircraft.

India is a major client for Russia's arms industry and the two countries have signed an agreement to jointly produce Kamov Ka-226 military helicopters.

Russia's pivot to Asia comes after its economy was hit by sanctions imposed by the European Union and United States over its 2014 annexation of Crimea from Ukraine.