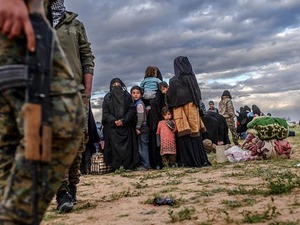 Kurdish authorities in northeast Syria on Thursday handed over three siblings linked with the Islamic State group to Nigeria, the first such repatriation to the African country, an official said.

"Three children... were handed over to representatives of the Nigerian government," said Fanar Kaeet, a Kurdish foreign affairs official.

The siblings are a girl and two boys -- all between five and ten years old --  who had lost both parents, Kaeet told AFP.

A representative of Nigeria's government said his country is also looking into other cases.

"We have asked the foreign relations department at the Kurdish administration for a list of Nigerians and Africans" under their custody, Musa Habib Marika said.

"As for Nigerian (IS) fighters, the Nigerian government will look into this," Marika said in response to a question as to whether his country had any plans to repatriate combatants.

The Kurds have spearheaded the US-backed fight against IS in Syria, and in March expelled the extremists from their last patch of territory in the war-torn country's far east.

Even as the Kurds fight remaining sleeper cells, thousands of alleged IS fighters and family members are being held in their custody.

These include hundreds of suspected foreign fighters in jails, and thousands of their alleged family members in overcrowded camps.

Western countries have been largely reluctant to repatriate their nationals.

But Germany, France and Belgium have brought a handful of orphans home, while the U.S. last year repatriated a woman with her four children.

Kazakhstan, Uzbekistan and Kosovo have repatriated dozens of women and children.

IS overran large parts of Syria and Iraq in 2014, proclaiming a "caliphate" there, but offensives in both countries have seen them lose that territory.