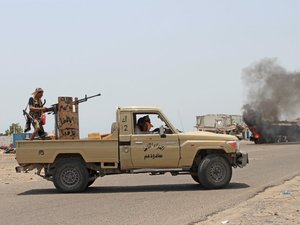 Saudi Arabia and the United Arab Emirates are trying to repair the damage to their coalition in Yemen after heavy fighting between their allies for control of the country's south.

Yemen's Saudi-backed president accuses the UAE of fomenting a coup by its allies, the separatist Yemeni militias. The dispute risks opening up a new spiral of violence and fragmenting the country even further.

Last week saw a stunning escalation as Emirati warplanes blasted fighters loyal to Yemen's internationally recognized president, Abed Rabbo Mansour Hadi — the man the coalition is supposed to be trying to restore to power. Dozens were killed, and the Emirates rubbed salt in the wound by calling Hadi's forces "terrorists."

The militias have overrun Aden and other southern cities, driving out Hadi's forces in bloody fighting.