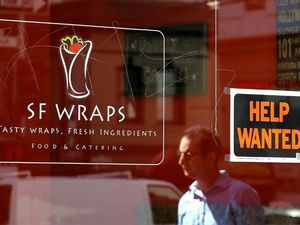 Asian indices had risen earlier in the day on news that the United States and China are to resume high-level trade talks in October.

On Wall Street, the benchmark Dow added 0.3 percent, leaving it up 1.5 percent for the week.

In Washington, the Labor Department said employers added 130,000 net new positions in August, far fewer than analyst forecasts for 171,000, while the jobless rate held steady at 3.7 percent and wages rose.

The headline figure included 25,000 temporary jobs related to the upcoming 2020 population census, which meant hiring by private employers was even weaker.

Data for the two previous months were revised lower as well. The numbers suggest US economic activity is slowing down, reinforcing expectations of interest rate cuts by the US Federal Reserve this year.

Speaking in Zurich, Fed Chairman Jerome Powell added to signals the Fed will cut at its September 17-18 meeting.

The central bank will "continue to act as appropriate to sustain this expansion," he said, noting "significant risks" to growth, such as trade conflicts and persistently low inflation.

Meanwhile, after a tumultuous August, dealers got a shot in the arm this week from news that Beijing and Washington plan to resume high-level trade talks next month.

"In recent months, there has been a lot of tough talk from both sides but the prospect of the two sides sitting down, and holding trade talks has lifted sentiment," said David Madden, market analyst at CMC Markets UK.

"The trade spat has been going on for well over a year, and it is unlikely to be wrapped up soon, but at the moment things are going in the right direction."

In Asia, Hong Kong finished up 0.7 percent, with dealers seeming to brush off news that Fitch had downgraded its sovereign debt rating citing the sometimes violent protests in the financial hub.