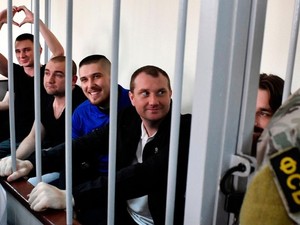 All 24 Ukrainians captured by Russia last year are expected to be part of an imminent prisoner swap between Kiev and Moscow, the head of their defence team told AFP on Saturday.

"According to my information, they were put on a bus. All 24 of them," Nikolai Polozov told AFP, adding that he expected them to arrive in Ukraine "in the next few hours".