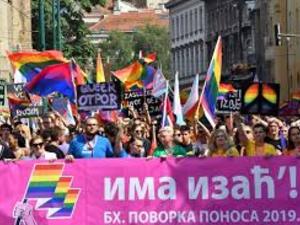 More than two thousand people turned out in Sarajevo Sunday in the city's first Gay Pride march to protest against the hate the LGBT community suffers in Bosnia.

More than 1,100 officers, including riot police, sealed off the route of the march through the city center.

"More than 2,000 people took part in the march and it passed off without incident," police spokesman Mirza Hadziabdic told AFP.

Members of the LGBT community and others walked for 1,500 meters (nearly a mile) starting from a monument commemorating the liberation of the city at the end of WWII.

Among those taking part were ambassadors from several western countries, including Britain, France, Italy and the United States.

The march ended with a rally in front of the Parliament.

Activist Lejla Huremovic celebrated the fact that members of the LGBT had, with this march, made themselves more visible.

"Today, we say louder than before that we will fight with bravery and dignity for our lives (to be) ... free of fear and violence," she said.

"We demand a society in which we will together fight against violence, hatred, isolation and homophobia," said another activist, Branko Culibrk.

Sarajevo was the last capital in the Balkans to hold a Gay Pride march.

In 2008 and again in 2014, radical Islamists and thugs attacked people taking part in gay festivals.

Bosnia, a country of 3.5 million people, officially outlaws discrimination on the basis of sexual orientation, but it does not recognize partnerships between people of the same sex.

Some Muslim associations and political parties representing Muslims had urged the organizers of the march to call it off.

On Saturday, a few hundred people took the same route in a march in favor of the traditional family, while on Sunday, around 150 people gathered in a park to protest the Gay Pride march.