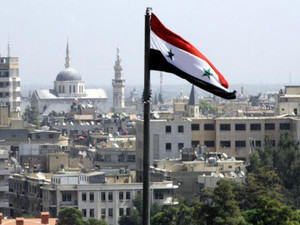 Damascus said Sunday it strongly opposes joint patrols in northeast Syria by the United States and Turkey, calling it a flagrant "aggression" that seeks to prolong the country's eight-year conflict.

The Syrian government also reiterated its "absolute rejection" of a planned safe zone in the area, calling it a violation of Syria's territorial unity.

The source described the patrols as an "aggression" that "aims to complicate and prolong the crisis in Syria," SANA added.

The U.S. and Turkey on Sunday began joint patrols in northeastern Syria aimed at easing tensions between Ankara and US-backed Kurdish forces who have fought the Islamic State jihadist group.

Six Turkish armored vehicles crossed the border to join U.S. troops in Syria for their first joint patrol under a deal reached between Washington and Ankara, an AFP journalist reported.

The agreement reached on August 7 aims to establish a "safe zone" between the Turkish border and the Syrian areas east of the Euphrates river controlled by the Kurdish People's Protection Units (YPG).

The YPG is an ally of the US but seen as a terrorist organisation by Turkey.

Turkish President Recep Tayyip Erdogan has threatened to launch an operation against the YPG in Syria unless progress is made on setting up the safe zone.

Syria's conflict has killed more than 370,000 people and driven millions from their homes since it started with the brutal repression of anti-government protests in 2011.