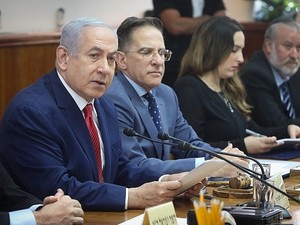 Israel's Arab population sees the move as an attempt at voter intimidation since many may be afraid to turn up at polling stations due to the cameras.

Netanyahu says the legislation is only intended to prevent voter fraud, but critics call it a purely political move ahead of the September 17 poll.

"The best way to prevent fraud in the elections is to station cameras in every polling place and allow poll watchers from the rival parties to supervise each other," Netanyahu said at the start of Sunday's cabinet meeting.

His cabinet approved the bill on Sunday, an Israeli official said, but it now must go to the parliament with little time remaining before the election.

The parliament, or Knesset, said in a statement that a special session was planned for Monday on the issue.

Attorney General Avichai Mandelblit has reportedly told ministers he was not against such legislation in theory, but said it would need to be explored in depth and not rushed through days before the vote.

The current law does not permit it, he said.

Israel's central elections committee has opposed the use of cameras at polling stations.

The positions of both have drawn fire from Netanyahu's Likud party.

"I reject these attempts to undermine public trust in these bodies and those who are leading them with professionalism in the process of preparing for the upcoming elections," Rivlin said.

The legislation would allow election supervisors from political parties to bring cameras to polling stations, though not inside voting booths.

Likud has alleged voter fraud in Arab communities in the April polls, but Israel's Haaretz newspaper reported on Sunday that investigations have so far turned up none in favor of Arab political parties.

Many political commentators have viewed Netanyahu's camera push as serving two political interests: depressing Arab turnout and energizing his base of right-wing supporters by warning of the potential of a stolen election.