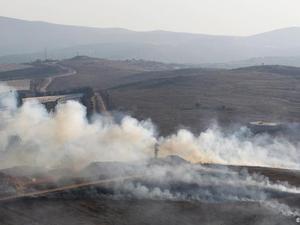 Hizbullah said Monday it had shot down an "Israeli drone" as it crossed the border into Lebanon, a week after a flash confrontation between the arch-foes.

Fighters from the group "confronted with the appropriate weapons an Israeli drone" heading towards the border village of Ramyeh, a statement said.

The drone is now in the hands of Hizbullah, it added.

The Israeli military said a "drone on a routine mission in northern Israel fell," without elaborating on what it was doing nor how it was downed. It said the drone was "simple" and that there was no risk of a breach of information if it fell into enemy hands. The military said the drone fell Sunday, not Monday, and the reason for the discrepancy was not clear.

The incident follows an escalation in tensions between the two, which included an exchange of fire on Sunday, September 1, when Hizbullah said it had fired anti-tank missiles into Israel, destroying a military vehicle and killing or wounding those inside.

Israel's army said it had responded with around 100 artillery shells after Hizbullah targeted a battalion headquarters and military ambulance, hitting both. Israeli officials denied claims of casualties.

Hizbullah chief Sayyed Hassan Nasrallah later said his organization would respond to any further Israeli attacks with strikes "deep inside Israel" and not just along the border.

The flare-up was sparked by an Israeli strike in Syria which killed two Hizbullah fighters on August 24 and was followed by what the movement described as an Israeli drone strike on its southern Beirut suburbs stronghold.

Israel has not acknowledged that attack, but accused Hizbullah and Tehran of colluding to produce precision-guided missiles on Lebanese soil.

Israel has staged hundreds of strikes against what it says are Iranian and Hizbullah targets in Syria since the civil war began there in 2011, vowing to prevent its arch-foe Iran from entrenching itself militarily in the neighboring country.

But a drone attack by Israel inside Lebanon would mark a departure -- what Nasrallah labelled the first such "hostile action" since a 2006 war between them.

The flaring tensions come just a week ahead of Israel's September 17 election, with Prime Minister Benjamin Netanyahu seen as wanting to avoid a major conflict ahead of the vote.

But Hezbollah is not supposed to be at the border if Lebanon were in compliance with UN Resolution 1701!

Ex you are correct in that hizbullah is not supposed to be at the border, but are drones sent by israel and other violations of our airspace in compliance with 1701? Has israel ever complied with any U.S. resolutions?

of course not! Two wrongs don't make a right. The Lebanese Army should be the one defending our land and not an iranian militia.

Fighters from Hizbullah "confronted with necessary weapons an Israeli drone" as it entered southern Lebanon, a statement said.

The drone is now in the hands of Hizbullah, it added.

Total absence of the Lebanese state and its glorious army.

So much from the strong lebanon bs.

"Mystic 15 minutes ago
The power of Iran cannot go unnoticed."