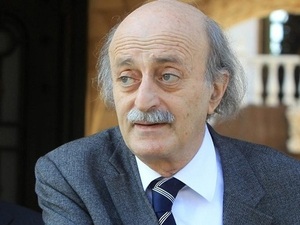 “We are calmly watching the developments and thanks to Speaker (Nabih) Berri, the dialogue with the party was restored after a break, its best to calmly express points of view through communication and emphasize the right of each group for calm expression,” said Jumblat in a tweet.

Jumblat added: “We are going to calmly focus on the importance of reforms mainly the electricity sector as advised by (senior French diplomat and interministerial delegate tasked with following up on CEDRE, Pierre) Duquesne as a way to limit the deficit.”

On Saturday, Berri brought PSP and Hizbullah delegations for a meeting at the Speakership residence in Ain el-Tineh.

The two agreed to settle their differences after months of disputes.