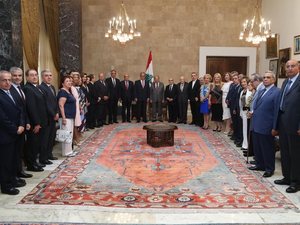 President Michel Aoun on Monday praised the latest reconciliations between political parties, and urged the Lebanese not to have any fear for the future, the National News Agency reported.

"Have no fear for the future as Lebanon will not fall at all," Aoun said.

Aoun said that reconciliations are necessary between parties “because it would be difficult to embark on resolving the economic, financial and social challenges amid disagreements," he said.

On the upcoming appointments, Aoun said only the best would be selected to assume key positions.

Aoun's remarks came during his meeting with Head of the Maronite Central Council, Wadi Khazen, at Baabda palace.

“Aoun said only the best would be selected to assume key positions.”

It’s time for him and his in laws to step down... unless this only applies to others! We are so used to ‘the faites ce que je dis, pas ce que je fais’ .

Lebanon collapsed in '89 because of the MujnAoun, it collapsed again when the MujnAoun returned like a tsunami, it's collapsing more than ever under his plastic surgery disgraceful chair obsession as a failing corrupt President that was gifted to him in hope he'd implode with a heart attack and leave our world and spare us his misery..
God help Lebanon and save us from this project