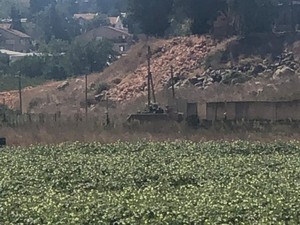 The Israeli army on Monday resumed drilling and barricading works near the military road that is adjacent to the electronic border fence opposite the Lebanese al-Wazzani park, Lebanon’s National News Agency said.

An Israeli military patrol meanwhile combed the military road next to the border wall between the Israeli settlement of Metulla and the hills of the Lebanese town of Adaisseh.

The Lebanese Army and UNIFIL peacekeepers were meanwhile patrolling areas near the border wall to assess the situation.

An Israeli drone meanwhile hovered over the Marjeyoun district during the Israeli movements.