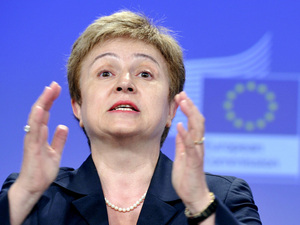 A top executive at the World Bank, Kristalina Georgieva of Bulgaria, now faces no opposition in her candidacy to lead the International Monetary Fund, the fund announced Monday.

Georgieva, currently the bank's chief executive officer, is all but guaranteed to become the second woman ever to lead the fund.

Georgieva will replace former IMF chief Christine Lagarde, who has been named to lead the European Central Bank.

"The board's goal is to complete the selection process as soon as possible and at the latest by October 4, 2019," the IMF board said in a statement.

Under an unwritten rule, a European has always led the IMF since its creation in the aftermath of World War II while Washington has designated the leadership of the fund's sister organization, the World Bank.

The nominating period closed on Friday, a day after the fund formally lifted the age limit of 65 years for its leadership, clearing the way for the 66-year-old to take up the position.

No other candidates came forward.

The IMF executive board will now hold meetings with Georgieva, the statement said.

She said last month she was "honored" to be nominated to lead the IMF and was taking leave from her work at the World Bank.

The IMF, a global crisis lender, has been buffeted over the last year by the rise of populism in advanced economies and escalating trade conflicts running counter to the fund's mission of promoting international commerce.