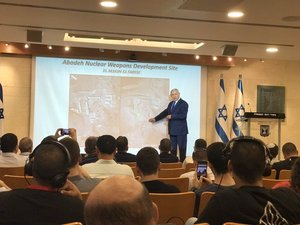 Israeli Prime Minister Benjamin Netanyahu on Monday accused Iran of having a previously undisclosed site aimed at developing nuclear weapons that it destroyed.

Iran destroyed the site located near the city of Abadeh, south of Isfahan, sometime between late June and late July after realizing that Israel had detected it, Netanyahu alleged.

In an address on live television, with photos of the alleged site on a screen behind him, Netanyahu referred to an intelligence trove he had previously announced last year.

"Today we reveal that yet another secret nuclear site was exposed in the archives that we brought from Tehran," Netanyahu said.

"In this site, Iran conducted experiments to develop nuclear weapons... When Iran realized that we uncovered the site, here's what they did: They destroyed the site, they just wiped it out."

The prime minister, whose country is an arch-enemy of Iran, did not provide further details on the alleged experiments, or when they purportedly were held.

Iran says its nuclear program is for peaceful purposes only.

When he announced the intelligence trove allegedly obtained from a secret compound in Tehran, Netanyahu said he had new "proof" of an Iranian nuclear weapons plan that could be activated at any time.

But while Netanyahu then accused Iran of lying about its atomic ambitions, he did not provide evidence that Tehran had actively worked to obtain the bomb since its 2015 nuclear deal with world powers.

Netanyahu's latest statement comes just days ahead of Israel's September 17 polls in which he is facing a difficult re-election campaign and opponents accused him of politicizing intelligence with the presentation.

"Netanyahu is again using intelligence information for his election propaganda," Yair Lapid of the centrist Blue and White alliance said on Twitter.

"The Iranian nuclear (issue) cannot be used for campaign antics."

Iran has been scaling back its commitments under the 2015 deal in response to U.S. President Donald Trump's pullout from the accord and reimposition of sanctions.

Netanyahu firmly opposed the nuclear deal and then urged Trump to withdraw from it.

Despite having opposed the deal, he has recently called on European nations to enforce its parameters as he and the United States seek to raise the pressure on Iran.

European nations have been trying to keep the nuclear deal alive.

Speculation has meanwhile mounted over whether Trump could soon meet with Iranian President Hassan Rouhani, with the U.S. leader saying earlier this month that "anything is possible."

But Rouhani last week ruled out holding any bilateral talks with the United States.

Netanyahu said Monday that "I call on the international community to join President Trump's sanctions to exert more pressure on Iran."